If one looks back in time, it is difficult to ascertain when SEO came into existence. However, it is evident that it has been around in different forms ever since the internet came into existence. SEO refers to Search Engine Optimization that is directly built for the search engines. Google as we know is now used as a synonym to search engine today, however, not many of you would be surprised to know that there have been several search engines before Google and there are many search engines that run today as well. Taking into consideration the exact usage of the term SEO, it is believed that it has completed over 25 years of existence. Let us take a look at the journey over the years and the evolution it has undergone for the past 25 years. 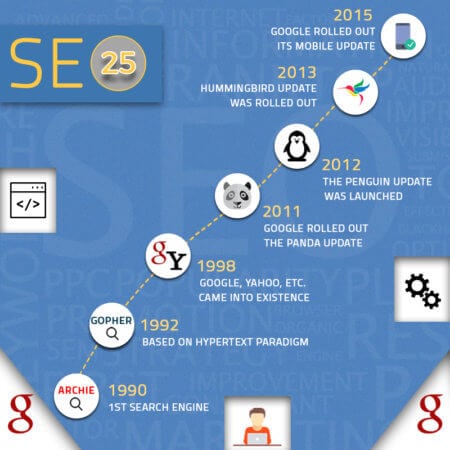 Yes it is true, Google was not the 1st in the race and the 1st search engine which was developed with the use of internet was in the year 1990. Initially a school project that was designed to offer a platform that indexed, archived and shared FTP files, the tool was named Archie. Although, it was not near to any of the present day forms of Search Engines, this tool had a complex back-end that worked on different algorithms that were designed to collect and organize the information that was indexed. The next in the race was Gopher that was based on hypertext paradigm and was developed in the year 1992. Consequently it was followed by the launch of Wandex, the 1st search engine that crawled the web and indexed online pages and offered a platform to search among the indexed pages. The modern names like Google, Yahoo, etc. came into existence after 1998.

SEO on the other hand was evolving with the level of development and evolution that these search engines were undergoing. The premise for this was to follow a strategy to prepare everything that was being indexed on the search engines in a manner that made it easier to rank and search for the key terms. The initial days saw some pioneers meeting up and learning from each other to compile their research and findings and shape up the world of SEO. For instance, it was in the year 1995 when John Audette launched his own company named Multi-Media Marketing Group (MMG) in Lage Oswego. The company launched Oregon that was an online book about marketing on the internet which sold over 4000 copies at the rate of $30 each.

The popularity encouraged him to recruit a few other SEO pioneers named Marshall Simmonds and Derrick Wheeler. Together they had planned to assist companies in several multi-media projects but seeking the potentials of the web over online marketing they ended up creating I-Search Internet Marketing newsletter that touched a subscriber base of 20,000 in its peak. John also had Danny Sullivan in his team who was responsible to teach the other members the tricks about search ranking trade. It was during this phase when John came up with the term of Search Engine Optimization. The early days here was spent by the pioneers in an attempt to discover the importance of Internet marketing of websites and the necessity of optimizing them accordingly. This was solely aimed to be done in a manner that aided websites and businesses to rank better on the search engine and end up getting more and more traffic. Eventually, today we tend to find no distinction between Search Engine Optimization and Search Engine Marketing.

While the above was taking shape and the pioneers were busy in framing the strategies, somewhere in California the legend of internet was starting off its journey. Google as we know today is an American Multinational Technology Company that specializes in virtually everything related to the internet, was found in the year 1998. Two Ph.D. students named Larry Page and Sergey Brin from the Stanford University gave birth to the company on September 4, 1998. However, the primary journey had started two years back in the year 1996 when both the students were working on a research project. During this time most of the conventional search engines were ranking pages and indexing information based on the number of times the search terms were appearing on any of the particular page.  However, Larry and Brin came up with a new technology that was known as PageRank which analysed the relationships among different websites.

As per this technology, the importance of these pages were taken into consideration and the relevance was determined by the number of pages and the importance the other pages had that were linking back to the original site. It was initially named as BackRub which was later renamed to Google based on a misspelled word Googol. The premise for Googol was number one being followed by hundred zeros signifying that search engine was intended to offer large amount of information. The initial days saw Google running as a subdomain of Stanford University’s website. It was only in the year 1997 when a dedicated domain was registered in its own name.

In the initial days, Google as a search engine was not as powerful as it is today. We know it to be the most powerful forms to do everything on the internet and hardly question its accuracy. However, in the late 90s or the early 2000’s the scene was entirely different. In those days, ranking higher on the search engines was believed to be a 2-step process, namely:

Seeking the flaws, team at Google began the refinement and development process of something that we call the algorithm changes today. Each time the team came across a weakness, Google worked towards fixing it and converting them into delivery of relevant and high quality search results. For instance, you may recall algorithm changes like the most recent mobile friendly updates where the mobile friendliness of any website is an important factor to rank on the search engine. This update was termed as Mobilegeddon. There are a series of several changes that started in the year 2003.

The following table will look on the different years and the algorithm updates that came into existence year on year:

If we take a look at the past as well as the recent updates, it is pretty clear that Google has been focussing on high quality content and intending to offer a better user experience. However, if we are to understand the aspects of recent updates and the future that may be driven through them we can summarize as below:

To conclude and state what SEO has been and what comprises of white Hat are SEP technique, we can summarize as below:

Each year the search engine giant makes every effort to have far-reaching impact over different industries as brands are finding their content to rise and fall overnight. It is only the manner in which the content is aligned that matters the most. Google has explicitly stated that it gives more focus on quality content development instead of mere effort for ranking over the search engines. The marketers need to focus on adopting high quality content strategies and club them with digital strategies that reduces the risk of being penalized from any of the Google Updates.