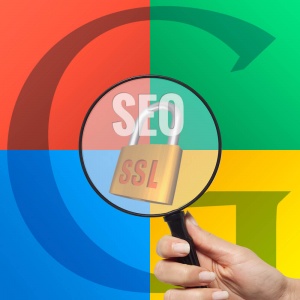 According to Google a new update pertaining to their algorithm has (apparently) put SSL’s in the running for “most important trait” when it comes to SEO. Google stated themselves that SSL is going to have some sort of say in the way your organic rankings react, and SEO gurus all over the world reacted to the statement. They truly believed that SSL couldn’t play an important part in the way organic rankings react with Google because it had no effect on the content of the site itself, so it was only right to get into other search factors that could be considered more important than SSL. SSL might hold some sort of merit, but the weight of this merit is left to be determined. Could Google be trying to flock us like sheep? Maybe they’re going to start selling SSL’s themselves once people start to buy into the latest trend? One thing is for sure, SEO is still alive and there are search factors that could be considerably more important than incorporating an SSL certificate on your web page; you just need to be able to see things clearly for yourself. We’ll take you through a few of these factors in order to help you beat this “SSL fad”, because only the best of the best know what’s really going on.

Be Consistent With Your URLS

Make sure that your links (well, the links that you want your readers to be seen) are consistent and implemented well. One of the most common occurrences when it comes to mistakes is the use of a canonical link within the XML (sitemap), which is a big no-no. When you update one link you should be updating absolutely every single link being used, it’s as simple as that. Keeping them updated will help your organic rankings immensely.

We all know how important content is when it comes to the SEO side of things, if you don’t have content that’s going to intrigue and keep your readers interactive than you’re rankings are going to suffer. People tend to believe that a certain count of words (like 300 or 500) are going to be the best option, but using a “formula” to produce your content isn’t ideal. The best content isn’t going to follow a certain equation (although there are quality writers out there that can handle this feat with no problem at all), so keep that in mind the next time you’re having a few articles written up.

Have Your “Live” Text Near The Top Of Your Page

Believe it or not the search engine “spiders” that crawl through webpages to rank them don’t make it to the bottom of your page, it can happen but it’s something that just usually doesn’t occur. Live text is essentially a regular piece of content, it’s what search engines are going to read over in order to see what your site is about (and then eventually rank it accordingly). Leaving your live text near the bottom of your page (or even hidden) is a quick way to reduce the organic rankings you’re receiving from search engines.