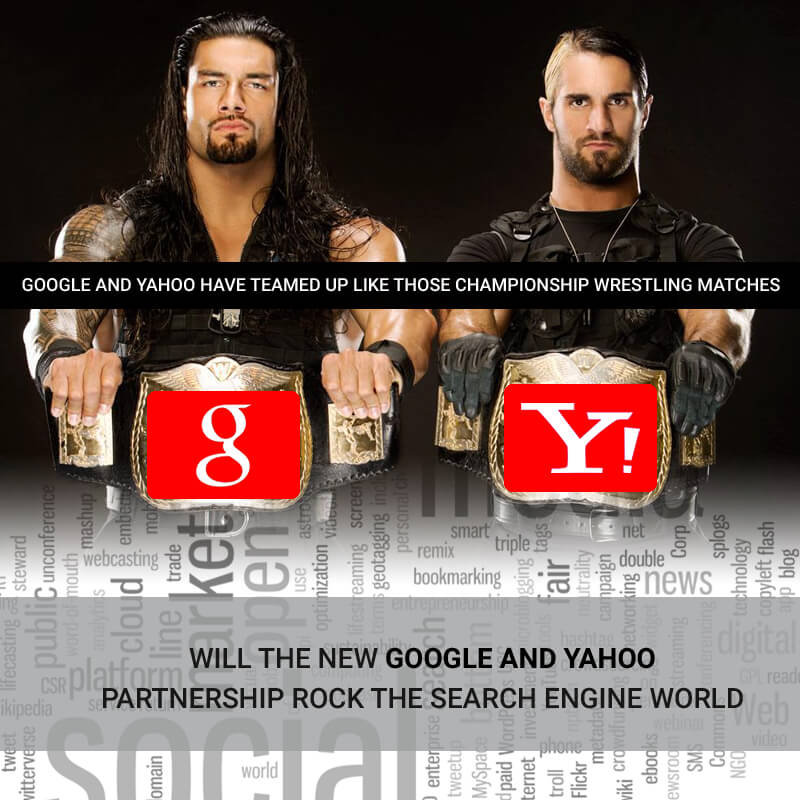 Well the news is all over the place, Google and Yahoo have teamed up like those championship wrestling matches, and the SEO world is standing by to see what happens next.

It’s actually part of the reorganization of SEO and advertising all around. What’s happening is that Yahoo and Google are teaming up regarding paid advertising strategies. The same type that Yahoo had with Bing.

This team up means that both search engines will have far more optimized ad results and sharing in the overall revenue. It comes as no surprise because now Yahoo will have the best of both worlds. They still have their partnership with Bing doing the same thing, and now teamed up with Google. The potential is enormous and experts will be watching the results like hawks over the next couple of years.

It was in March 2015 that negotiations with Bing allowed for Yahoo to work with Google and this non-exclusive approach will give Yahoo all the goodies with a good chunk of revenue from both Google and Bing. Basically, it allows Yahoo to have total control over the kind of queries it sends to Google and which queries it sends to Bing. It’s a total have your cake and eat it too scenario that should have all three partners rolling in dough.

What this means for the surfer is that they’ll be getting ads that are so targeted that there’s no telling what will happen next. Will surfers only get the most expensive options in regard to products and services, or will they get the most value and quality ad results. If only the wealthy get the shot, the small business owner is going to be hard pressed to compete as well.

What this spells for the future is the big boys realize that they can work together and profit even more. By not being antagonistic to one another they can make marriages and focus their energies on greater rewards. Yahoo seriously needed this joint venture. Having both Bing and Google at their behest means they’ll be able to repair the damage done by their lack of oversight that pushed them down the ladder in the search engine game in the first place. Google and Bing will be monitoring things from the ground floor up to see how this benefits them, and the math so far says it can’t help but be a success.

The truth be told, it’s the surfers who will make the final decision. If they’re inundated with ads that are of no benefit but only out to snag their dollars, they’ll shy away and look for calmer pastures. This is where an upstart search engine can get a foothold in and believe it, there are investors and engineers waiting on the sidelines looking for any opportunity to even get 5% of the search engine industry.

Well the surfers will be the judge on the ads, but what of the advertisers themselves The results of this marriage of Google and Yahoo means that advertisers are going to have to shell out the cash to get their ads out there in front. Can the small business guy compete with the big boys Will only major corporations and businesses get the spotlight Will there be an avalanche of rotten looking ads but paid for As of yet it would be assumed that things will look the same as today but who gets the high ground will indeed depend on how much money they put in.
The jury will be out for some time on this merger, but the thing to watch out for is the feedback from customers and advertisers. Even people you know who utilize the ad services will be talking about their results. The millions of internet marketers and promotional agencies will leap up if they notice no gain in profit from the investment they put down. ROI or Return On Investment is the bottom line here. If that ROI is lower than what’s been expended in advertising, you’ll see a backlash right from the start. That’s when people should start worrying and Google and Yahoo will have to change their game plan