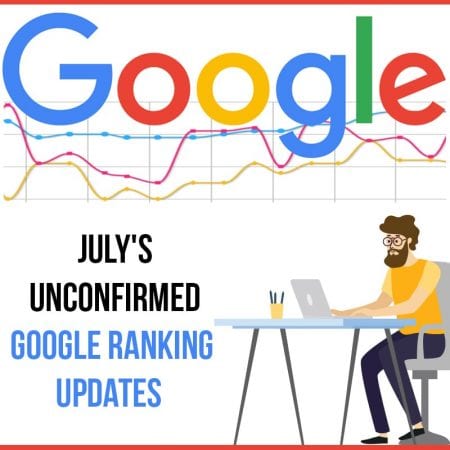 Google search result rankings were quite volatile between July 11 – 18. Various tools that track Google’s changes (e.g. Mozcast, SERPMetrics, Algoroo, AdvancedWebRankings, Accuranker, RankRanger, Cognitive SEO, SEMRush) noticed that this was happening. This is something that Google hasn’t responded to themselves. John Mueller himself has said he doesn’t know anything about it or what other experts are talking about but that regular, core updates occur on a regular basis.

This early July update is being referred to as the “Maverick update” – a name that was given it to by Brett Tabke, the found of WebmasterWorld. Many believe that he grabbed this name from a discussion thread in which it was said that the Maverick update was conducted to honor the Top Gun trailer release that occurred the previous day. Tabke continued on to say that this update looks both stealthy and precise although most of the major algo reporting tools have indeed said that it’s occurred. Unfortunately, this isn’t a name that everyone likes but since the early 2000s it’s been left up to WebmasterWorld to create these names.

Throughout the middle of July many noticed a significant spike in Google “chatter” from members of the SEO community, especially on social media. Many tracking tools corroborated with this pattern when it came time to review their clients’ traffic and ranks. While June did pre-announce that they’d be updating in June, saying they’d probably do the same in the future, nothing was said in July.

When data providers were asked about these updates, they said these are unconfirmed. In fact, many of them thought that this was a “weird” update that you couldn’t find any patterns for even when they attempted to compare it to previous core updates. In fact, here’s what a few of the Google tracking tools had to say:

Obviously, it’s not a good idea to chase algorithm updates but it is good to know when Google makes an update that impacts your site’s ranking. It’s also important to understand if this change was caused by something you’ve technically changed on your website or a change that Google themselves have made. Of course, you may also feel better knowing that you aren’t alone here.

When you don’t know how to prepare for these fluctuations or even recover once they’ve happened, talk to the Local SEO Company. They’ve helped many businesses over the years survive the ups and downs of Google and look forward to helping you with your SEO next so get in touch with them today.