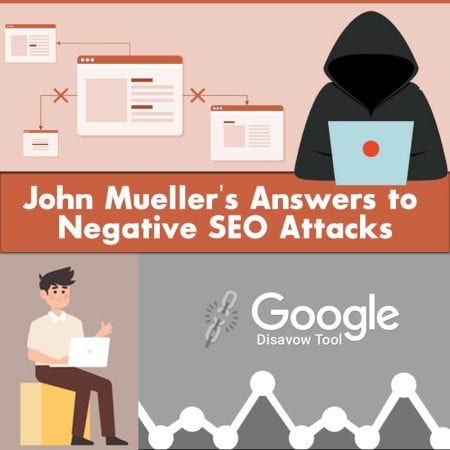 John Mueller from Google recently answered a question about a suspected negative SEO attack. This question was based on a website’s owner’s belief that they were getting a lot of spammy links because their competition was attempting to lower their rankings. The website owner wanted to know whether they should continue to disavow these links every week. Mueller replied that Google’s algorithm is programmed to ignore spammy links altogether. This seems to work rather well since there doesn’t seem to be many issues.

Mueller also said there’s a difference here. He says that Google sees a lot of normal spam links. They just happen naturally all the time since the very beginning of the search engine. He acknowledges that this often happens because spammers believe that if they link to a high-ranking website, they can make Google believe that they’re more of an authority than they actually are. These websites do this in hopes that they’re spammy links will be overlooked – something that doesn’t work. This is an outdated SEO myth, dating back to 1998. Mueller advises website owners not to worry too much about these links saying that Google will usually figure this out on its own.

Google’s disavow tool is available to those who are still concerned that spammy links will lower their standing in the SERPs. While Mueller says that this tool is unnecessary, he admits that developers have left it here as a way to help calm webmasters’ nerves. Instead of losing sleep over these links you can use this tool to make sure that Google handles them correctly. Mueller says it’s perfectly fine to do so since you’re not admitting that you’re guilty or anything. Instead, you’re simply telling Google that these links shouldn’t be taken into account for your website. There are many reasons why you may want this to happen so Google’s algorithm doesn’t even try to figure out your reasoning here.

Another tool that Google has made available to webmasters is the domain detective tool. This tool makes it easy for you to handle spammy links by placing them in a disavow file, which is great if you have extreme cases of your website being spammed. Otherwise you shouldn’t use this tool much. In fact, Mueller recommends that you only use it in very rare occasions. This means that most websites should never have a need to use this tool, which is why Google has placed it away from the search console where you won’t be as tempted to use it.

The bottom line is Google is able to handle any of the normal spammy links that may come your website’s way. This is because since the very beginning their algorithm is set up to do so, allowing you not to worry too much about them. You can tell simply by looking at their business model that they want to get rid of as much of the irrelevant nonsense that exists online today as they possibly can. As such, they’ll always ignore any links that are located outside of the “normal” neighborhood. Instead, Google will concentrate on ranking websites with great content, that get rave reviews from visitors without any regard to the spammy links it may also receive.

Now that you’ve heard Mueller’s version of what to worry about when it comes to negative SEO you can move on and spend your time on what really counts: Moving your way up in the SERPs. For help with this you should contact the Local SEO Tampa Company today.