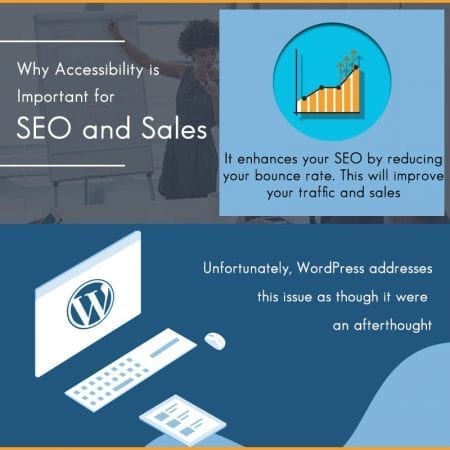 Traditionally, accessibility hasn’t been given much thought in terms of SEO and web development. However, there are some reasons why its importance is something you shouldn’t overlook.

How WordPress Addresses This Issue

Unfortunately, WordPress addresses this issue as though it were an afterthought. This is because they’ve created a plugin to take care of things for them instead of building accessibility directly into the platform itself. Admittedly, they believe they’ve taken the wrong approach here, but they still have yet to build it into their platform. There are many reasons why this should be brought to your attention outside of the simple fact that most screen readers don’t act in the way that you’d assume they would.

Highlighting the Importance of Accessibility

Although some platforms clearly are overlooking an important part of our population today, there are several reasons why you shouldn’t do this, including:

What the SEO Community is Saying

Many people within this community will agree that this is something that can no longer be ignored. However, there are still some people who are afraid of the additional cost factor websites may incur here. Obviously, there are some websites for whom accessibility is more important than others (e.g. those serving the elderly population), even when SEO isn’t taken into consideration. Nevertheless, we can all agree that it probably won’t take Google long to start factoring this into their algorithms as well. Why not be ready for it before it happens? You may wish to argue that this won’t happen, but all you must do is look at the growing number of voice searches that are now being conducted to see that this is a reality.

Here’s to Your Online Success

Whether it’s because you want to reduce your bounce rate or increase your conversion rate even further, this is the way to do it. Of course, you should also consider the other existing benefits as well – many of which were already listed, but you can’t overlook the fact that using features like alt tags will also help your website rank better. So, while it’s understandable that everything you do as a marketer has a pragmatic reason, you should understand that such reasons do exist here as well. As such, it’s time to put a plan to work so you can take care of this for your website. Since you probably feel as though you already don’t have enough time in your day for what you already need to do, adding one more thing to your “to do” list probably isn’t something you want to think about. This is why you should reach out to Local SEO Company and have them take care of this for you instead. With all their experience, you can’t go wrong letting them handle this job for you.