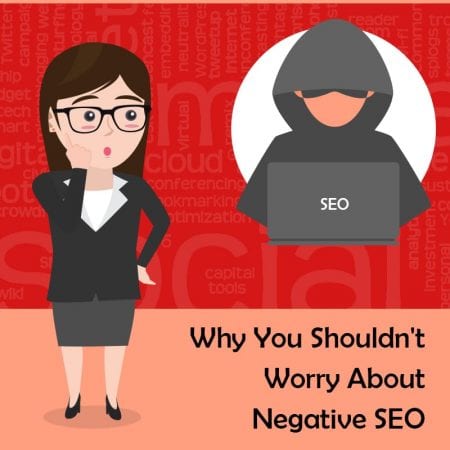 What many people don’t realize is that this fear is oftentimes overstated and even unnecessary. This is because Google has been claiming that spammy links don’t harm a website’s traffic. In fact, since their real-time Penguin 4.0 algorithm went live in 2016 Google says that a website would need to participate in these nefarious actions (e.g. unnatural link schemes, on-site keyword stuffing) for any harm to be done to their website.

Of course, negative SEO can reach beyond spammy links. It can also include things like fake reviews or complaints made to Google My Business. There are also some tactics that are much more serious such as hacking, inserting malware on a website, and creating denial of service attacks. All these things can have a massive, negative impact on your organic search traffic.

Understanding Drops in Your Website’s Traffic

There are lots of different factors that can cause your organic search traffic to drop, but rarely is it caused by negative SEO. More common causes for this include:

Considering how the Penguin Algorithm Relates to Your Website

Google’s Penguin algorithm rocked the natural SERPs in 2012. However, their goal was simply to target web spam and poor linking practices. This is something they continued to work on for the next four years (through 2016). If your website received a Penguin-related penalty during this time, its performance was impacted, and you couldn’t do anything about it until the next Penguin update. Finally, in 2016 Google incorporated the Penguin algorithm into its real-time algorithm allowing websites to recover from these penalties as soon as their bot recognized that you changed your link profile.

This same update also changed how Google goes about evaluating bad links. In the years since 2016 they’ve gone from demoting these sites to simply devaluing the links themselves. Some people believe that Google no longer counts poor links against your website. Instead, Google simply overlooks such links. This dynamic change was made because Google knows that every site receives some spammy, unwanted links.

Considering the Impact of Disavowing Links

Gary Illyes, a Google analyst, says while he’s reviewed a large number of negative SEO requests on sites that all had other issues that were responsible for their drop in organic search performance. In other words, negative SEO is never the reason these rankings were impacted. Nevertheless, Google’s disavow tool still exists for use in extreme cases (e.g. if you receive a message from Google about a manual penalty). This is something that’s been repeatedly reiterated by John Mueller himself.

All of this can be a lot to understand. Sometimes it’s easier to leave things in the hands of the professionals. If this is how you feel, contact the Local SEO Company so they can get started working on your SEO for you.